Admittedly, I am an ultra-paranoid, over-sensitive, don’t want to ruffle feathers kind of girl. I don’t easily get over it when someone doesn’t like me. Or even if they like me but have just one teeny-tiny slightly-negative thought about me. Not that everyone loves me, or anything. It’s just that I – thankfully – don’t know who doesn’t like me. Ignorance is bliss.

Then recently, I was told that I brag about my kids. Although it was added “I don’t mean that in a bad way. But you do brag about them.” Not in a bad way? Ummm…. okay. That clarifying sentence didn’t do much to ease my mind about the bragging part.

Before I go on, just know there is no need to fill the comment section here with “Please keep posting! I love to read the funny things your kids do!” Or other such ego-boosters. You have all been very kind and have already shared the love plenty. It’s just one comment from one person that has weaseled its way into my psyche and slowly pecks at the loving comments from others. You know how it goes… It just takes one drop of blood to taint the whole batch. No, that’s not it. But anyway…

I don’t like braggers. I avoid them. And I’ve tried to be very conscientious about not bragging. Not that I have to work hard at it or anything… it isn’t like I actually have many accomplishments, skills, talents, belongings, or other good-enough-to-brag-about things.

It’s just that Matt and I decided from the very beginning – when I was first pregnant – that we didn’t want to be one of those parents. You know, the ones that tell everyone each and every awe-inspiring accomplishment of their child more than twice because they forget they’ve told you already, or the ones that genius-ize every basic skill their child has. “My 8-month-old breathed today. Isn’t he amazing? He is the smartest baby I know. Hands down.” Nope, that was not going to be us. Even if our kids learned to crawl at 3 months, walk at 5 months, and read at 2. (They didn’t.) And even if they received countless awards for their cuteness, were smart enough to solve quantum calculations, or could scale Mt. Everest – or even a flight of stairs – while jumping rope. (They haven’t, they aren’t, and they can’t.) Cute? Yes. But not a single award. Not even one. And while I don’t want to squelch their hopes and dreams to “be whatever they want to be” or “do whatever they want to do,” we’ve got to be realistic here… They do have Matt’s and my genes, after all. Quantum physics is not likely in their future (I don’t even know what it is.) And Annalise, my girl, you have many talents. Coordination while walking is not one of them. Mommy is sorry I passed that on to you, baby. Let’s just be thankful we’ve both managed to make it this far without sprained ankles or broken arms.

No, bragging is definitely not something I find appealing.

And so of course, my over-sensitivity and over-analyzing self quickly went into over-drive. I cried. I laid in bed awake re-playing every conversation I ever had with this person. I read every Facebook post and blog post I wrote since… well, pretty much since ever. I asked a few key people just a couple questions, like: Do you think I brag? If so, when? And how? And to whom? And about what, exactly? And if you don’t think so, what kinds of things do I say or write that could come across as bragging? And do you think I should stop writing about those things? Should I stop writing about my kids? Should I stop writing altogether? Do you think I’ve offended someone? Who? Did they say something? What did they say? Do they not like me? Do I talk too much about the kids? Do I talk too much in general?…  You know, just one or two questions like that.

1. Yes, I agree I talk about my kids. And I write about my kids more than I talk about them. And I take pictures of them even more than I write about them. But I don’t really think describing the countless ways Jacob decides to redecorate the house with marker, vaseline, peanut butter, eggs, and other medium counts as bragging. And sharing stories about how Jacob told his sister he is sorry she is stupid, or how Annalise was super-sassy and how I responded with horrible parenting doesn’t exactly scream, “Look at me! My kids are THE BEST. And I must be THE BEST for having them turn out so perfect!“ And sharing pictures of my kids – who just happen to be astoundingly cute – isn’t the same as telling everyone my kids are astoundingly cute. It’s just sharing pictures. Feel free to draw your own conclusions about their level of cuteness or lack-there-of. If, after seeing pictures, you decide on your own that they are cute, that was not me bragging. That was your own opinion. Right? Right????

2. I do write about and post pictures of Annalise and Jacob an awful lot. But you know what? Dang right, I do! And why shouldn’t I? They are hilarious. They bring us joy in countless ways. They are our gifts from God. Sharing that joy with others is like bragging about how awesome God is for making such studly little amazing creatures. They certainly aren’t so awesome because of me. In fact, they seem to be that way despite me. And NOT telling others of their hilarious escapades would feel a bit like hiding a light under a bushel. Hide it under a bushel? NO! I’M GONNA LET IT SHINE!

Only, here’s the thing… I really am a wuss. Now that I’ve been called out for bragging, I cringe when I want to post something public. And so I’ve decided that while I will keep writing all the antics that keep us in hysterics, I will do more so on my blog and less so – although not never – on Facebook. That way, if you don’t like the “bragging,” stay out of the kitchen, would ya? And also, I won’t be posting every blog link to Facebook so as to not be any more annoying on there than I already am. So if you are one who enjoys reading about our home and would like to continue, you might want to click “follow blog” on the right – at least while I deal with my overly-sensitive hurt feelings and bruised ego. And added bonus!… By clicking to follow, you’re increasing the chances that my ego will recover all the more quickly, because I will be so pleased with myself to have a few more blog followers.

While I did just write a lot about not wanting to be a bragger, here is something definitely worth bragging about: Mom and Dad.

Married 40 YEARS TODAY. A young love that wouldn’t likely last… Met in April, married two months later on June 9, 1972. Spent the first few years just getting to know each other, I’m sure. They had 5 years to do so before my older sister was born. And now, 3 kids, 8 grandchildren (counting almost-born-Mason and our twin girls in Heaven), and 4 decades later, they are a shining example of a how building your marriage on the firm foundation of Jesus is not only the secret to success but speaks volumes of the love of God. They have shown me what it means to love unconditionally, live sacrificially, and commit to one another fully. They are the most giving people I know. And as a recent guest to their house said, “When you step in their home, you know it is different. You feel it.” And I’m pretty sure she wasn’t referring to dad’s quirky sense of humor or our general dysfunction.

I love you, Mom and Dad. And I’ll brag about you any day. 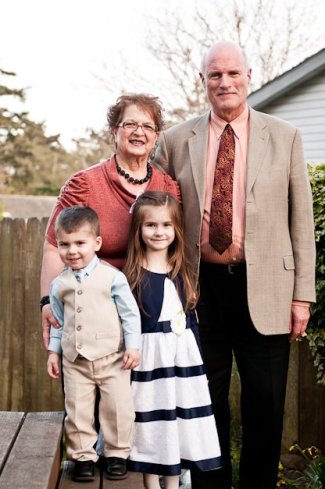 And finally, the only real reason to boast:

I will bless the Lord at all times;
his praise shall continually be in my mouth.
2 My soul makes its boast in the Lord;
let the humble hear and be glad.
3 Oh, magnify the Lord with me,
and let us exalt his name together!

4 I sought the Lord, and he answered me
and delivered me from all my fears.
5 Those who look to him are radiant,
and their faces shall never be ashamed.
6  This poor man cried, and the Lord heard him
and saved him out of all his troubles.
7  The angel of the Lord encamps
around those who fear him, and he delivers them.

7 thoughts on “Care to join the club?”