You know those parenting moments you don’t really look forward to, but you know are coming and there’s nothing you can do about it?

Moments like when your child gets his/her driver’s license. Expected, a good thing in many ways, but also terrifying and maybe a bit sad as your “baby” is nearing adulthood.

Moments like when your child moves out of the house to go to college. I cry just thinking about it, and mine are only 5 and 3.

Moments like the day your son or daughter comes home and says they’re getting married. Hopefully, you’re elated and this is all a very wonderful thing, even though it might be very emotional at the same time.

Tonight, I got to witness one such moment. One of those “I knew it would happen sooner or later, but how did this happen so fast?” moments.

Matt is still in New York helping with hurricane Sandy relief efforts.  He calls nightly, and while the kids miss him terribly, they haven’t been super chatty…

…until tonight. The second he called, Annalise asked to talk to him. Her conversation went pretty much like this (names have been removed to protect the innocent):

I get the phone. Matt says, “Really? THIS is the bomb she drops on me while I’m on the OTHER SIDE of the country?”

Prayers appreciated. Looks like Matt is gonna need them.

One thought on “Puppy Love” 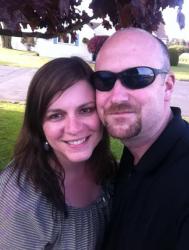